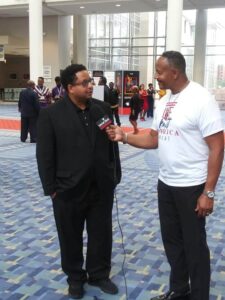 JMSP Entertainment & Films, based in Orlando, FL, has announced new details about their upcoming documentary series called “We Kept America Great.” This project, launching this month, explores the contributions of minority groups that made the United States of America the cultural and economic powerhouse it is today.

The team spearheading “We Kept America Great” is led by Johnnie O. Michael, Sr. of JMSP Entertainment and Films, and Dr. Pamela McCauley of Transforming Your STEM Career. Both have worked toward equality and inclusion in their respective fields. They want to bring the conversation about diversity into the average American home and believe that we can engineer a more inclusive future if we deeply study our history.

This documentary series will be delivered in five installments, spotlighting the contributions of African Americans, LatinX Americans, Native Americans, Asian Americans and Immigrants from around the world. From the era of slavery in the days of the founding fathers to contemporary American life, people in each of these minority groups have given their proverbial blood, sweat, and tears on the pathway toward making America a global leader.

“We find ourselves in a state of struggle as we search for ways to level the playing field for people of every heritage, every background,” said Johnnie O. Michael, Sr. “By reclaiming our history, acknowledging all American’s contributions and recognizing how important diversity and inclusion are to our country’s future, we hope to create a culture of respect and togetherness. Our ultimate goal is to unite the people of America because we ALL kept America great.”

A Letter of Thanks to Our Director and Editor, Krystal Alexandria